Walk on the wild side: A Paradise City-inspired look for Boobyball 2016 - A Pop of Colour Take me down to paradise city… 19 days until Boobyball Winnipeg and this year’s theme is the very colourful Paradise City!

In case you aren’t familiar with the wildest charity event of the year, Boobyball is the annual fundraising event for ReThink Breast Cancer, a Canadian charity that brings awareness to young adults concerned about and affected by breast cancer. ReThink is different from say, the Canadian Breast Cancer Foundation and the Canadian Cancer Society, in that it’s targeted to the under-40 crowd, led by young and influential breast cancer supporters, and they throw events that you totally want to be seen at.

Boobyball, their annual flagship event, celebrates its 15th anniversary this year. The event, which started in Toronto and is now held in Calgary, Toronto, Ottawa, and Winnipeg, is one of the most coveted and high-profile fundraising events for young philanthropists in Canada, and has raised over $3.4 million for ReThink Breast Cancer (last year’s events hosted 3,100 young philanthropists and raised over $470,000 nationally). Every year there’s a theme (last year it was space, the year before it was circus) and this year is the jungle-inspired Paradise City. 2016 marks the third year the high-profile event is being held here in Winnipeg. Our Boobyball will be on October 22, whereas Toronto’s is October 14, Calgary’s is October 27, and Ottawa is October 28 (FYI October is breast cancer awareness month). The party will be held at the Fort Garry Hotel from 9 p.m. to 1:30 a.m. and tickets are available through their site for $115 each (with a $15 tax receipt). The ticket includes admission to the wildest party of the year, complimentary bar service, an amazing gift bag, and more.

In case you haven’t been to their site yet, it’s the raddest portal to get you in the spirit of what they’re all about. Boobyball Winnipeg reached out to me to come up with a Paradise City-inspired makeup, hair and nail look and I couldn’t wait to unleash my inner tiger and come up with something that reflects the theme of the party.

For this look, I wanted to keep it more wearable. Yes, I love wearing bold makeup sometimes, but I wanted to do something that kept to the theme, yet is something that was relatively easy to do and totally something most people can pull off. I did a neutral eye with a wash of green along the lower lash line and a teal in the waterline to make it pop. 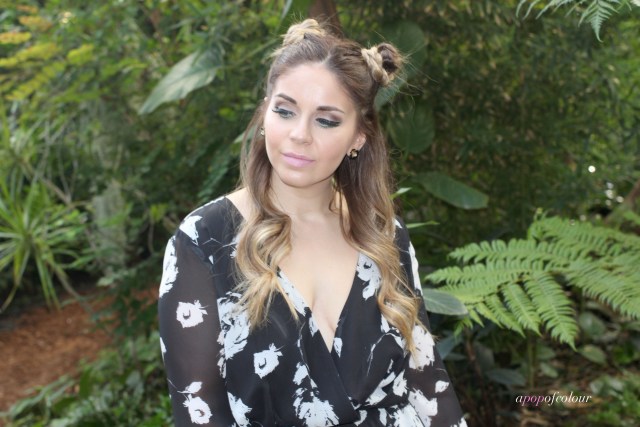 1. Fill in your brows then lay down an eyeshadow primer (I used Too Faced Shadow Insurance) from your lids to your eyebrows. With a medium orange colour, like Salted Caramel from the Too Faced Chocolate Bar palette, apply this colour lightly with a fluffy crease brush to your crease.

2. With a light cream shadow, like MAC Naked Lunch, apply this to your lid area.

3. With a matte brown, like MAC Soft Brown, apply this with a crease brush to your crease area. Go light and build the colour up.

4. Using the same brush and a darker matte brown, apply that over the other brown you just applied in your crease.  I used Triple Fudge from the Too Faced Chocolate Bar palette.

5. Line your upper lash line with a black liquid liner, winging it out. I used Rimmel London Color Precise Eyeliner in Black. After, apply mascara.

6. To up the ante, apply some false lashes. I used Kiss Ever EZ lashes with the Ever EZ Strip Lash adhesive.

7. With a white cream colour (like Too Faced’s White Chocolate), apply this to your brow bone to highlight.

9. To finish up the look, apply a green shadow similar in colour to the eyeliner over where you put the liner along your lower lash line (I used Kat Von D Lemmy). After, some mascara to your lower lashes. For my hair, since leopard is forever on trend, I did braided “ears” on the top of my head and then curled the rest. These were super easy to do; do a half-up pony and then split it in hair to do pigtails. Braid the pigtails and then loop them around and bobby pin them in place. After, with a clipless curling iron, curl the lower portion and add some texturizing spray for some added volume (I used L’Oreal Professionnel Wild Stylers 60’s Babe texturizing spray), then hairspray it all to set. For the nails, first I applied Essie Gel Couture polish in Haute to Trot (a purple-pink colour), then once it’s dry, on the ring finger I did a cheetah pattern using the Sally Hansen I Heart Nail Art Striper in black and Formula X Full Strength nail polish in Let’s Do This, a majestic teal.  To create the cheetah pattern, first, using a dotting tool (I used one from the Sally Hansen I Heart Nail Art Tool Kit), dot the teal colour on your nail, making all the dots different sizes. Then with the black, carefully outline the tops and bottom of the teal circles.

For the middle finger I did a palm leaf using the teal and black. First, with the black striping polish, do one line from the bottom of your nail to just shy of the top, then along the line make some lines going up at an angle. Then, with a striping brush, gently paint on the teal in-between the black lines. For the index finger I did a stripe of silver glitter polish (Deborah Lippmann Today Was a Fairytale), then I did a line of black metallic studs (from the Sally Hansen I Heart Nail Art Studs Kit). 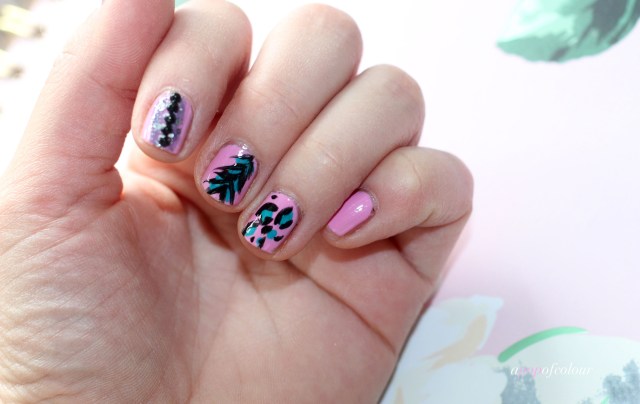 If you can’t make it to Boobyball this year, you can throw your own #MyBoobyball party to raise funds for ReThink. All you have to do is pick a date in October, register your party online, invite your friends by editing the invite they give you to suggest a donation amount to attend, and plan your party using their toolkit (which includes an exclusive playlist, inspo boards, and decor items). Oh, and did I mention it’s also a contest?! The top fundraiser will win a trip for themselves plus three friends to the Boobyball of their choice in 2017 (birds of a feather flock together!). Other prizes include a Topshop shopping spree, tickets to Boobyball 2017, and cash!

Let me know if you’re attending Boobyball this year and what you’re planning to wear. I’ll be taking a walk on the wild side October 22! See all you cool cats there!

Are you attending Boobyball this year?