What's In My Purse - A Pop of Colour 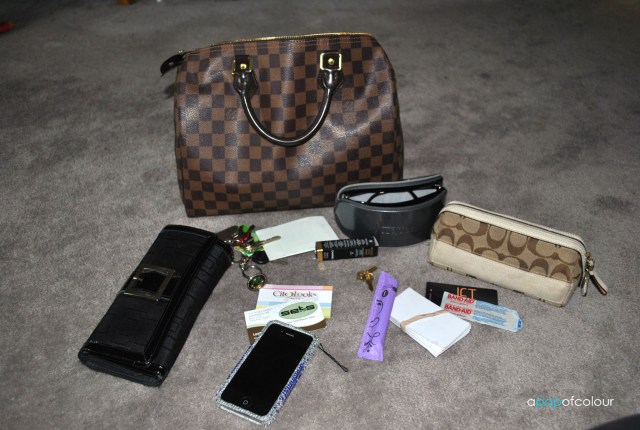 I don’t know about you guys but one of my favourite tags to watch on YouTube is the What’s In My Bag/Purse tag.  I am always so fascinated with what people carry around with them.  A purse is like a little look into people’s lives; there are personal things, fun things, and things I’m sure would surprise people.  If I’m out with someone sometimes I’ll ask to go through their purse (I’ll only do this with people I know they will say yes to), it’s just so interesting.  Anyways, just so you guys know, I literally just grabbed my bag and started pulling stuff out, I didn’t go through it ahead of time. 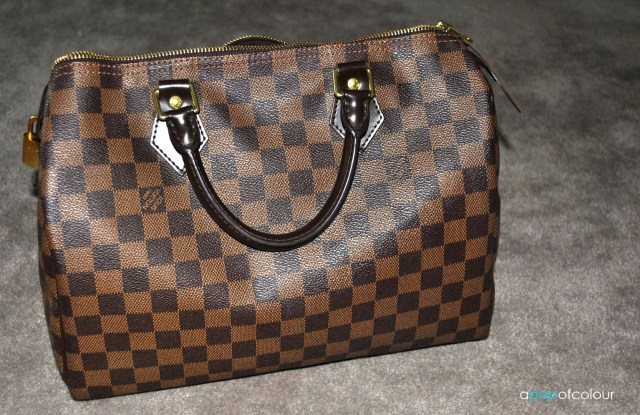 Alright so this is my purse, a Louis Vuitton Speedy 30 in Damier Ebene.  This was my first designer bag (other than Coach) and I bought it last November in Montreal.  I usually use this bag Monday to Fridays for work.  It’s a handbag so I usually just put it on the crook of my arm, it’s a little annoying carrying it if I have a ton of stuff to lug around though.  If I need to be hands free I’ll put all my stuff in my Coach bag. 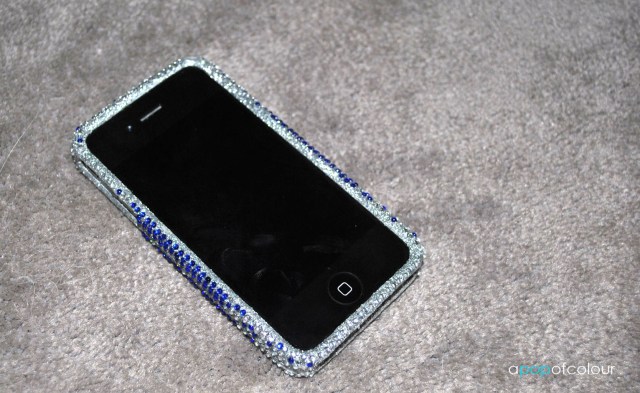 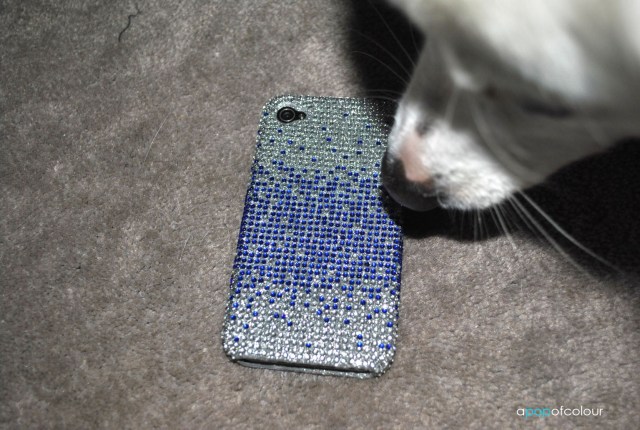 The first thing I pulled out is my iPhone 4.  I’m with Telus on their 4G network and it’s okay.  If I leave my city often I will lose service which kind of sucks. Also when I was in Vegas I had no service, which was weird because I had service when I went in February… It wasn’t so bad though because it kept my phone bill down, I just used Facetime.

The case for my phone is from a Cellaris kiosk, it was $25 CDN. 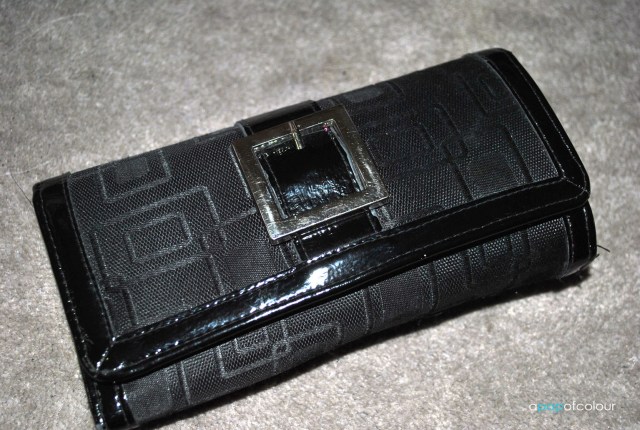 Next up is my wallet, it was literally like $10 from Sears.  Nothing special about it but it does hold a ton of stuff.  I have so many cards (mostly membership/points cards) and it holds all of them. 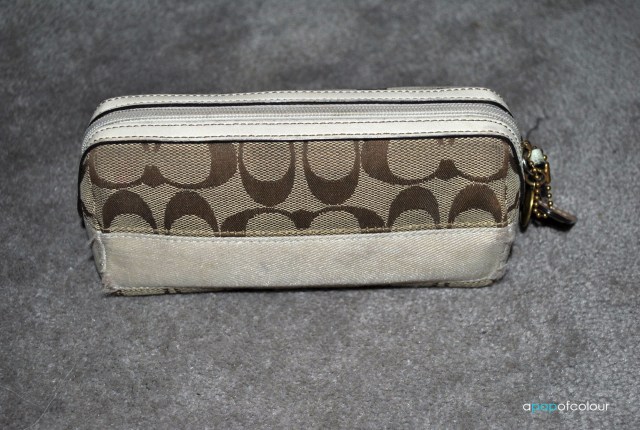 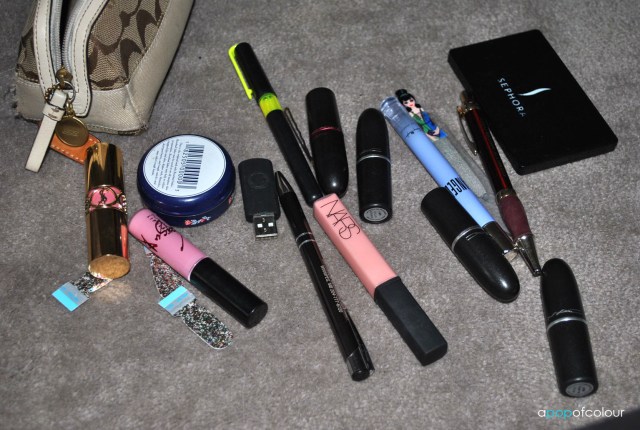 To protect the inside of my bag I make sure to store anything that could damage the lining in a cosmetic pouch.  I received this Coach one a few years ago from an old boss of mine and I keep a ton of lip products in it. I like having a few choices depending on the mood I’m in so I keep my MAC lipsticks in Myth, Quite Cute, Viva Glam Gaga I, and Blankety.  As well as my MAC lipglass in Viva Glam Gaga I, NARS lipgloss in Turkish Delight, Rosebud Salve, and YSL Rouge Volupte #19 on me so I have choices.  I also have Thierry Mugler’s Angel purse spray, two pens, a memory stick, a nail file, a highlighter, Sally Hansen Salon Effects spare nail strips (left over from Vegas), and a mirror. Yes, it all fits in that cosmetics pouch. 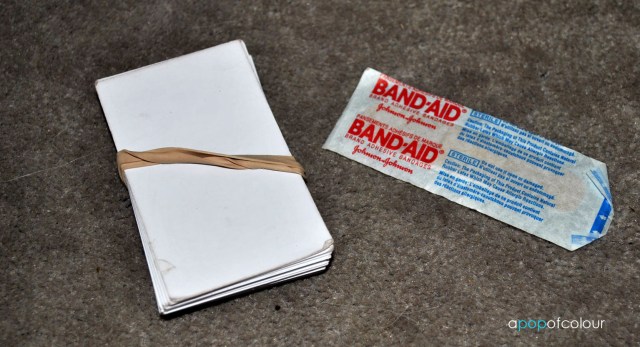 Next thing I pulled out are a stack of my business cards and a bandaid.  Any shoe can become uncomfortable and cause blisters so I threw this in my purse just in case.  As for the business cards, I’ve just been too lazy to take them out.  I also have cards in my wallet. 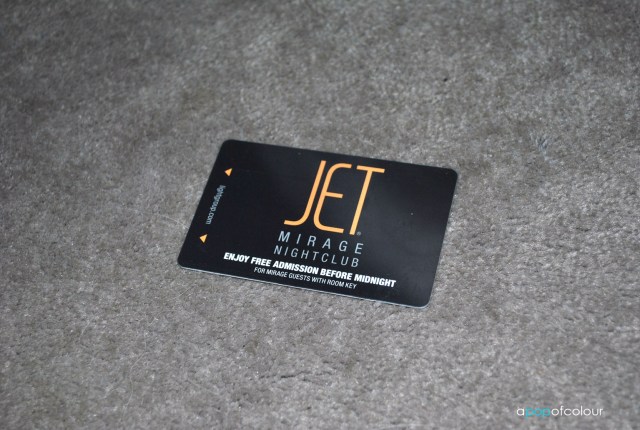 Room key from the Mirage!  I was going to give this to my friend because he loves JET but I keep forgetting it’s in my bag. 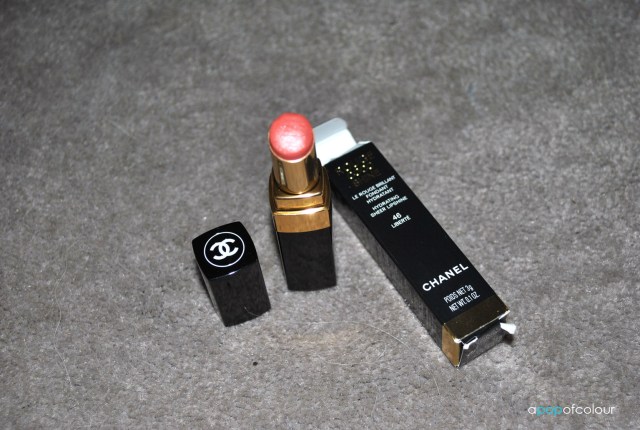 As if I don’t have enough lip products already I also threw in my Chanel Rouge Coco Shine lipstick in Liberte.  I keep it in its little box and everything haha.  I threw this in here because I think I was feeling a coral colour last week so I tossed it in my bag (I always carry pinks and nudes), so it’s something different to wear during the day. 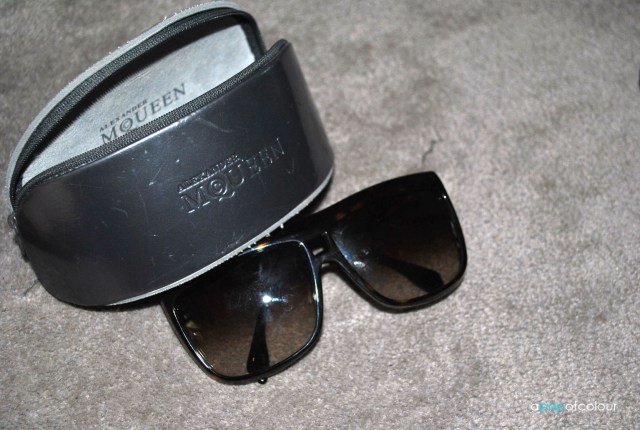 Sunglasses! I can’t live without sunglasses, seriously.  I try to have them wherever I go, you never know when the sun is going to get in your eyes. These are my Alexander McQueen AMQ 4133/S shades, I got them for my birthday this past year from my brother who got them at Costco for like $70 (I bought them, he paid me back haha). I love Costco for shades, they often have really good designers for great prices. 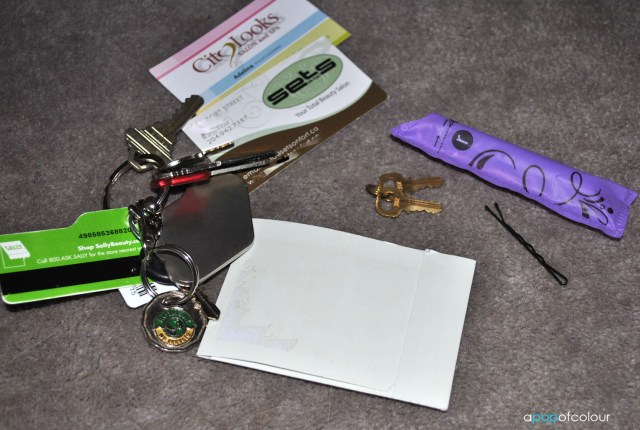 And here is the rest! My purse has one inside pocket so this is what I store in there.  I have a few hair stylists’ cards, my keys, a tampon, a bobby pin, pills, and keys to my Louis Vuitton’s lock (which I keep on the side of the bag).

So that’s it!  Hope you enjoyed going through my bag, I definitely do not keep as much stuff in my bag as other people. Let me know if you have posted a What’s In My Purse post or video, I would love to see it!