Chilly and magical: Travel guide to Churchill, Manitoba - A Pop of Colour 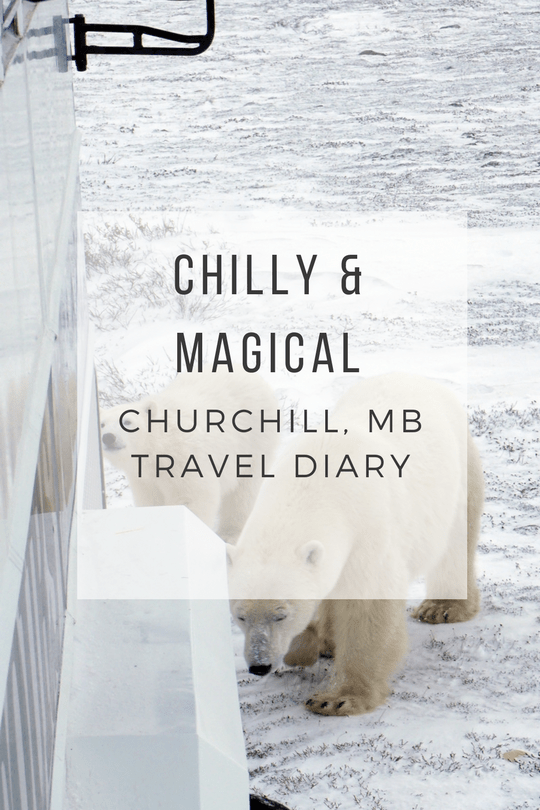 I would like to say that I’ve hit a lot of bucketlist places in Canada. When it comes to destinations I want to visit, the list is long, but for the most part, they are all international. I’ve never thought to even explore what’s in my backyard.

Churchill, Manitoba is pretty much on every travel media’s Canadian bucketlist. Located in Northern Manitoba on the shores of the Hudson Bay, the small town is known as the “polar bear capital of the world” since Canadian Wildlife Service indicates that there are between 900 and 1,000 polar bears in the western Hudson Bay population. It’s also one of few human settlements where you can observe these bears in the wild. The best time to see the bears is October through November when the bears begin their move from their summer habitat on the tundra back to the ice on the Hudson Bay where they hunt seals. It is possible to view them in the summer as well, however, the tourist season for the bears is October through mid November. 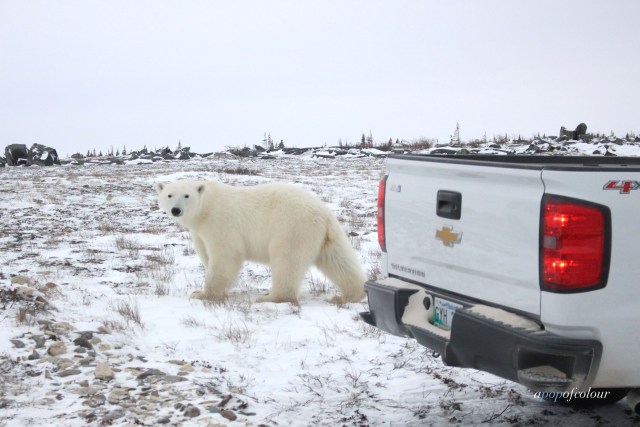 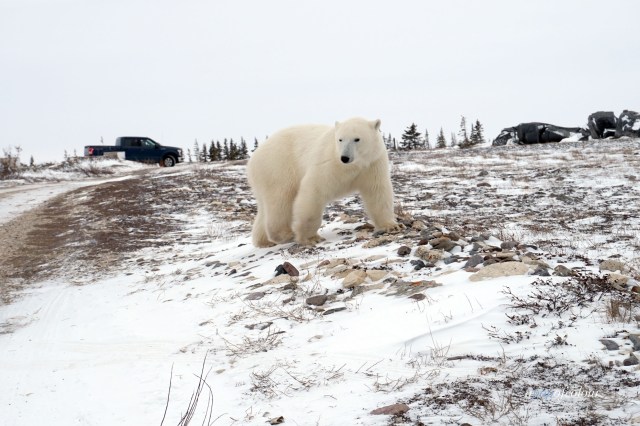 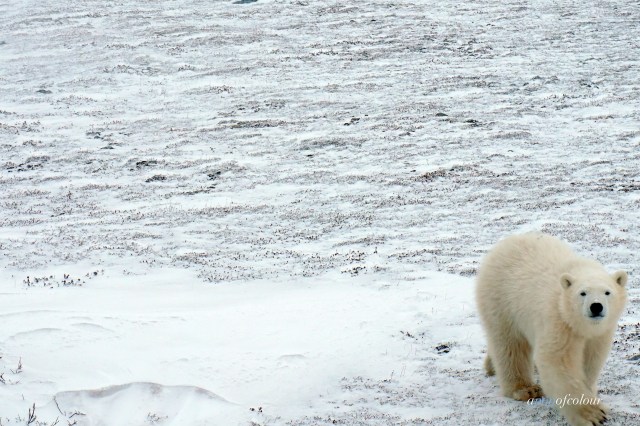 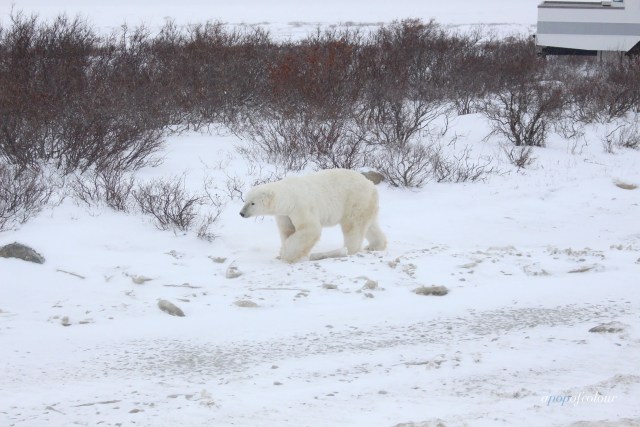 There’s more to see in Churchill than just the polar bears though (although it’s pretty cool to see polar bear warning signs throughout the town. They also have a curfew alarm at night to protect people against any bears wandering throughout town). In the summer, people travel up to see the beluga whales, birding, and flora. For the Northern Lights, those are best viewable in February through March.

Now, I will say that Churchill, Manitoba is an incredibly expensive trip. Since the railway shut down, it’s only accessible through air now, via Calm Air (there’s no road that leads there). When I looked up how much our plane ticket would have cost us, it was $1,800 round trip, for just the flight. So how did myself and three girlfriends make our way up? Air Miles. Did you know that from Winnipeg to Churchill roundtrip is only 1,200 miles (plus C$99 for fees)? Neither did I until last year. That’s literally the same amount of points as a blender. The only thing is they only allot a certain number of seats, so keep checking the Air Miles site since it took us close to a year to actually find the flights (which was totally booked on a whim, might I add haha).

We left Winnipeg on Friday afternoon at 4 p.m. and had to change planes in Rankin Inlet, Nunavut, which was an experience all in itself. I mean, when would I ever have the opportunity to visit Nunavut?! Although we were only in the airport for an hour, it was super cool to touch down up there (plus we met the sweetest Akita in the airport). As you can imagine, the airport was tiny with just a small booth selling pizza and candy. There was also zero security, which was so odd to experience; you just walk out onto the tarmac and then onto the plane. It was the same thing in Churchill as well. 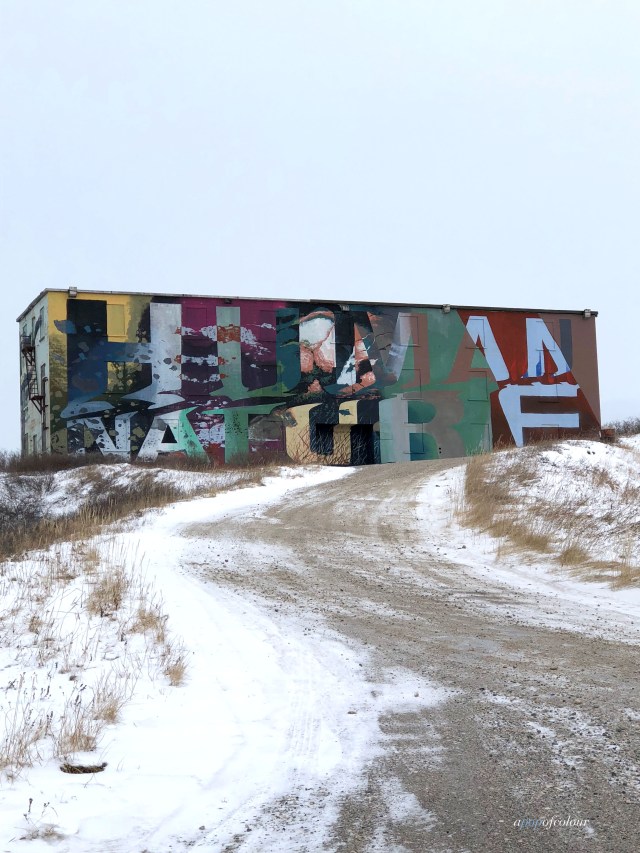 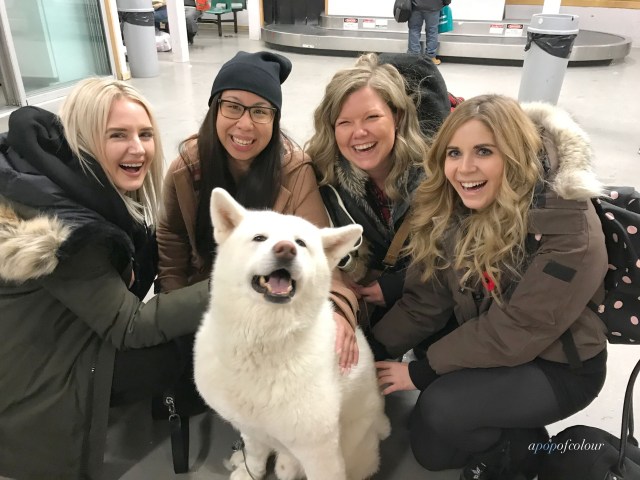 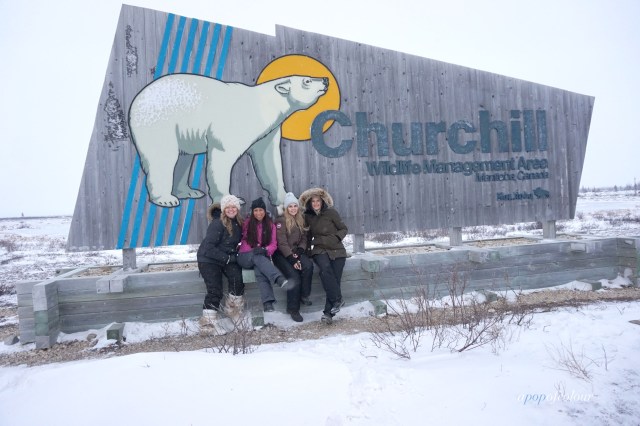 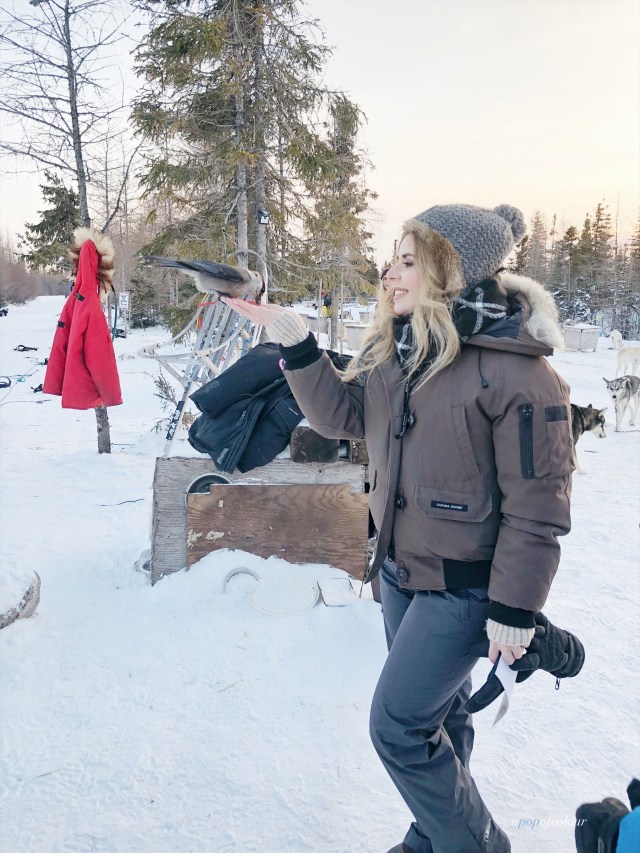 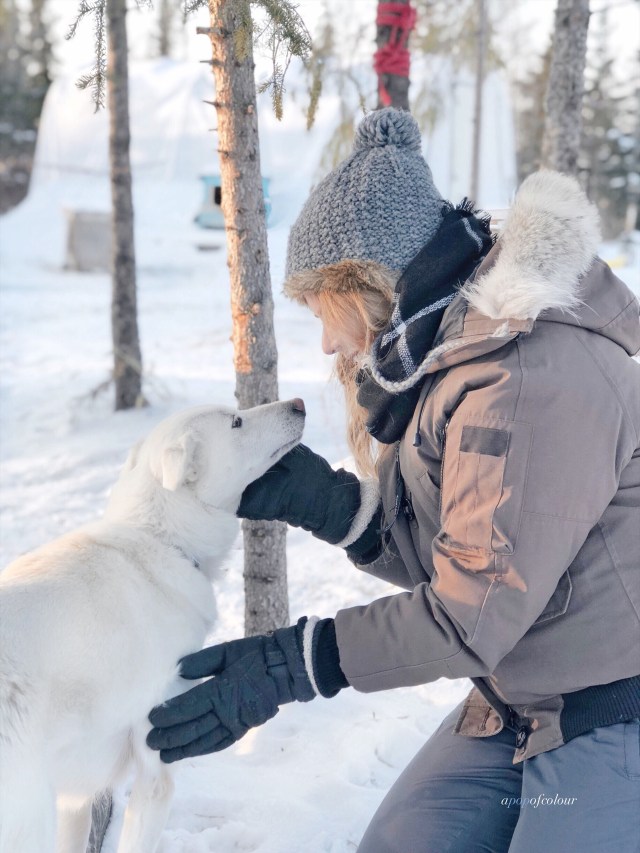 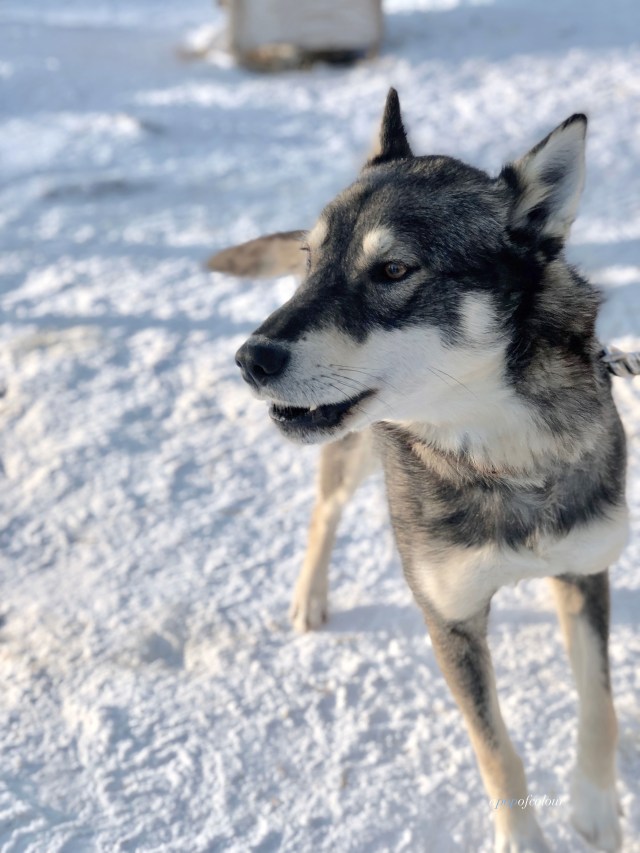 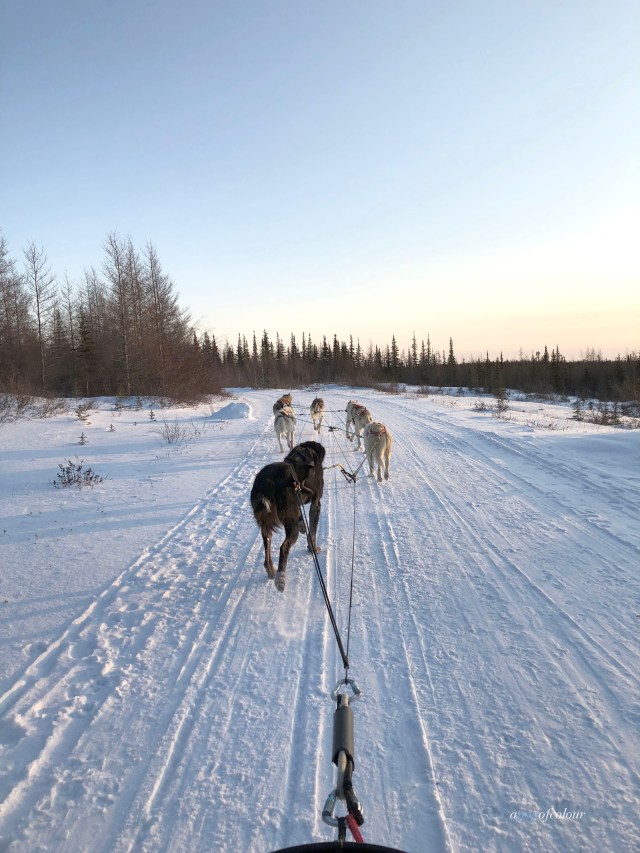 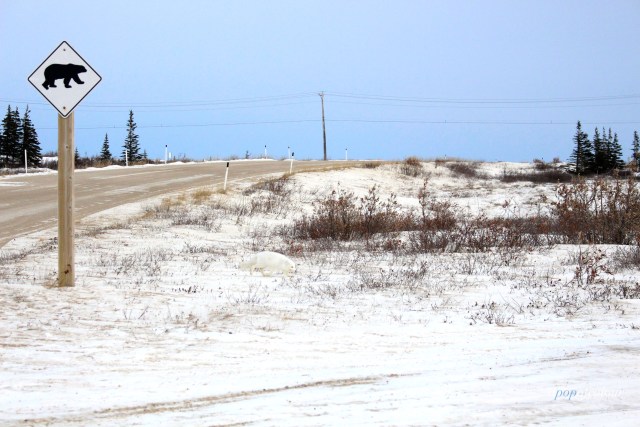 Anyways, we got into Churchill at around 9 p.m. (it’s a 45-minute flight from Rankin Inlet), then we called one of the few taxis they have to take us to our hotel, the Aurora Inn. We booked the hotel in July right after we got our tickets since I heard things book up really fast since there are only a few hotels and most of the package trips book them up (the Aurora was the third hotel I called since the first two were booked). I wasn’t expecting much from the hotel, but it was actually pretty nice. “Cozy” would be a better term. I read that the Aurora used to be an apartment complex, so the room featured a full kitchen, living room, and upstairs on the loft part were two double beds and a washroom, perfect size for four people.

For Churchill you would most likely just book a tour, since there are so many tour operators there, however, it can get incredibly pricey ($3,000 and up), so we did everything a la carte. The first day we did dog sledding at Wapusk Adventures, where we learned all about Dave Daley’s sled dog career and his dogs. The fact that the railway is closed is a huge topic up there as it makes everything really expensive to ship. Dave was saying how he buys his dog food from New Brunswick and now it costs him $4,000 for the shipping alone since it has to come in by plane. He wasn’t the only person to voice their concern about the price of shipping. Basically everyone we talked to was disappointed about the rail closure. Living in Winnipeg I had heard about it, but didn’t realize the extent of how much damage it did to the economy and community up there (OmniTRAX owned the rail line and the port and when both closed, they laid off over a 100 people, leaving many out of jobs). Because it was cheaper to travel by rail than plane it has also drastically affected their tourist season as well.  Once polar bear season is done, a lot of the businesses in the town shut down and many of the residents go on EI until things start up again.

Anyways, after we heard all about the dogs, we ventured outside to pet the dogs and do the Ididamile (when they take you out on the sleds for a mile). Since I’m a major dog lover, I loved sitting on the back of a sled while a pack of dogs drove us through the wilderness.

The next day we did the Great White Bear Tundra Buggy Tour, which was the priciest excursion of the trip ($472.50 per person). We got picked up from our hotel at 7:15 am and then taken to Wapusk National Park, 45 kilometres south of Churchill on the shores of Hudson Bay (you may recognize it because it was a McDonald’s Canada Monopoly piece this year as well). 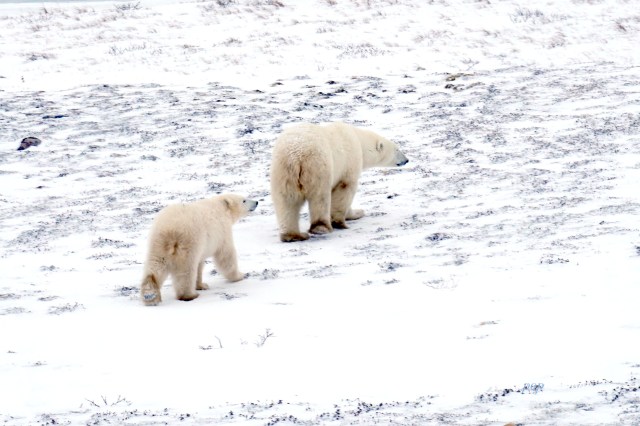 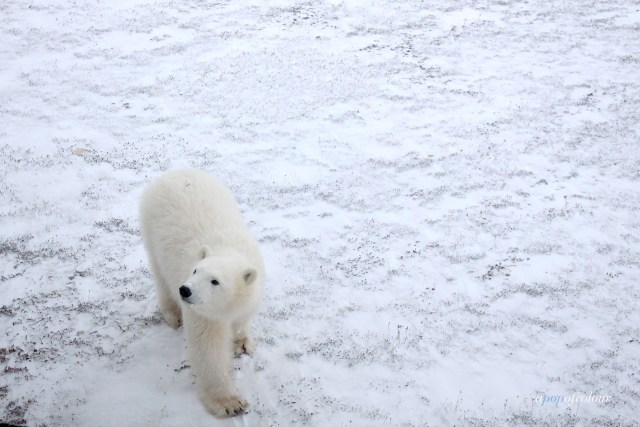 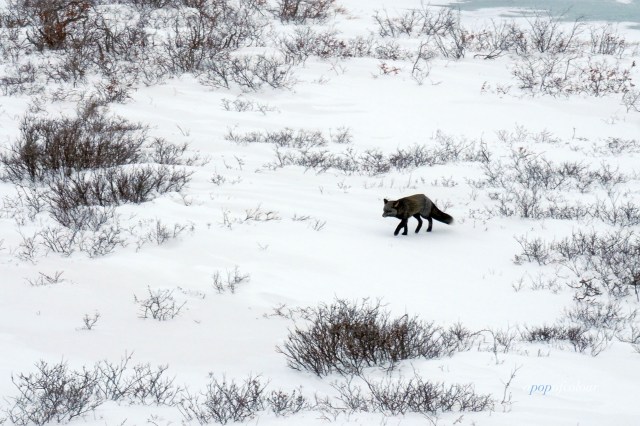 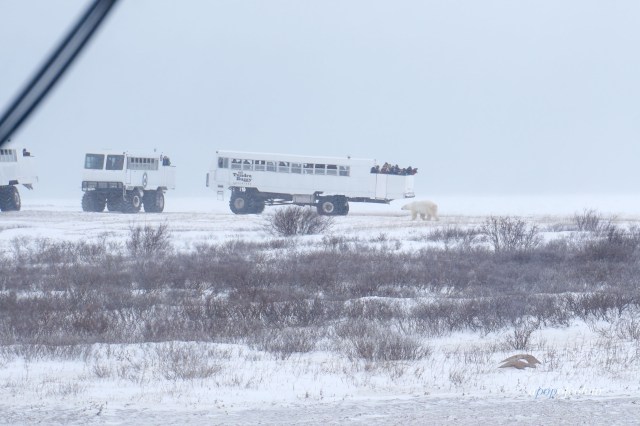 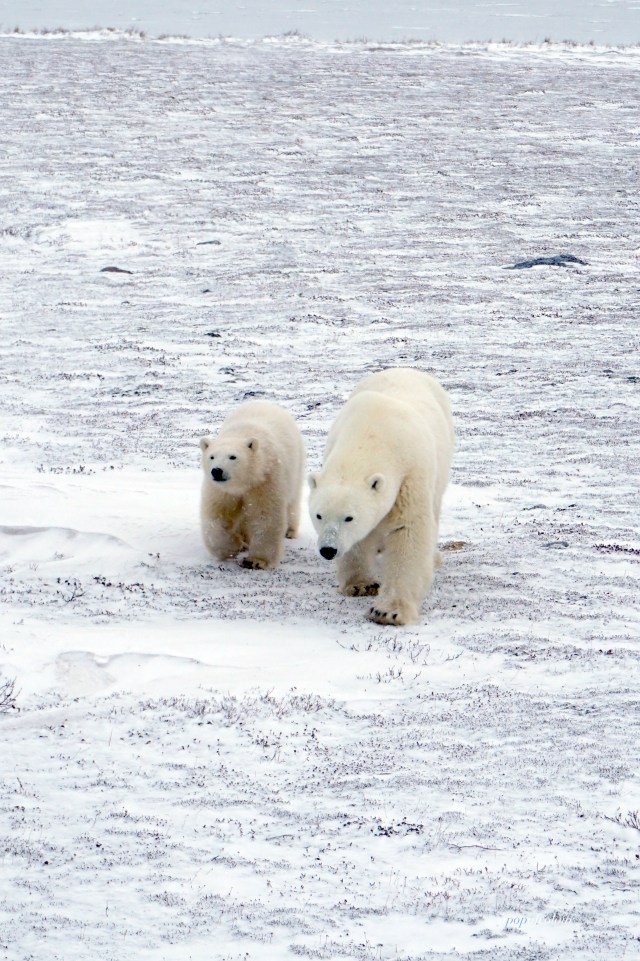 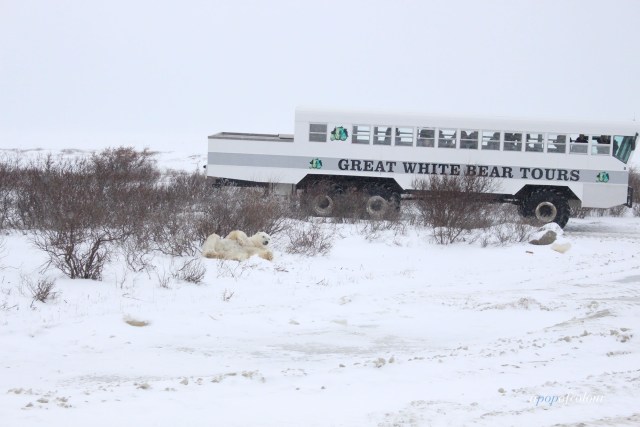 We were taken out into the park in a tundra buggy, a giant Hummer-like vehicle with six wheels that make it possible to drive over the rough terrain (they also have to have permits to go into the park themselves). The bus part of the vehicle is platformed on five-foot-something wheels so that polar bears can’t get into them. I’m not going to lie, it was a long day since we were out there until 3:30 p.m. We did end up seeing four bears; a mom and two cubs who came right up to the buggy, as well as a big guy who just took a nap and slept while we were parked eating lunch (it was the best lunch view ever). We also saw an arctic fox, a silver fox, a great white owl, and ptarmigan. We ended up seeing more bears the next day (I’ll get into that in a moment), and although I do think these tundra buggies are incredibly expensive, it was well worth the money after seeing those bears for the first time. I literally had tears in my eyes, it was so beautiful (and they were so cute!).

The next day we did a tour with Nature 1st, where Paul, our guide took us all over Churchill to see the sights of the town. We went to the Miss Piggy plane crash, the abandoned rocket launch site, the Churchill Northern Studies Centre, the Polar Bear Jail (where yes, it’s exactly as it sounds, where they take the bears who wander into town and then hold them for a number of days before flying them back out into the wild in hopes that the will be rehabilitated to not enter town again), and so much more. We also went near where the Canadian Eskimo dogs live, which was private property, but also had some bears in it as well.  Since we couldn’t go down that particular road if we didn’t pay, luckily the bears wandered right to where we were and we got to close to them. Paul has previously worked with bears and does polar bear security, so he was super knowledgable about their species and we all felt so safe when he let us off the bus so we could go take photos. The tour was $165 and seriously so worth it! If you are planning a trip to Churchill, definitely take this tour.

Since the town of Churchill is very small (there’s about 850 people who live there), there wasn’t really much to do there when we weren’t on excursions. We went to the Seaport, which is a hotel, lounge and restaurant one night for drinks and dinner, and ended up at the Tundra Inn pretty much every night since they have amazing food (get the spinach and artichoke dip) and it seemed like the place to be in Churchill (Saturday nights are trivia night). Aside from those places, we also went to Gypsy’s for breakfast on Saturday and I brought home some baked goodies as well (they have tons of cinnamon buns, donuts and pastries), and made sure to check out the former VIA Rail station, which is now home to Parks Canada and an interpretive centre which explained a lot about the culture, town, and the wildlife in the area. 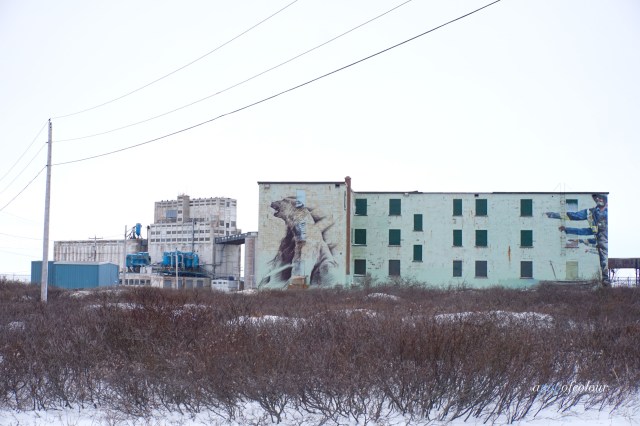 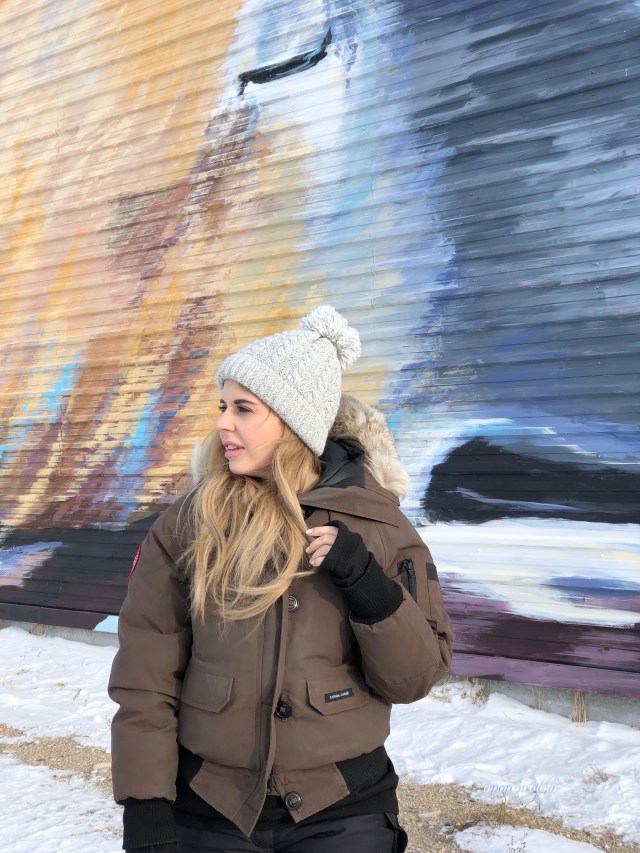 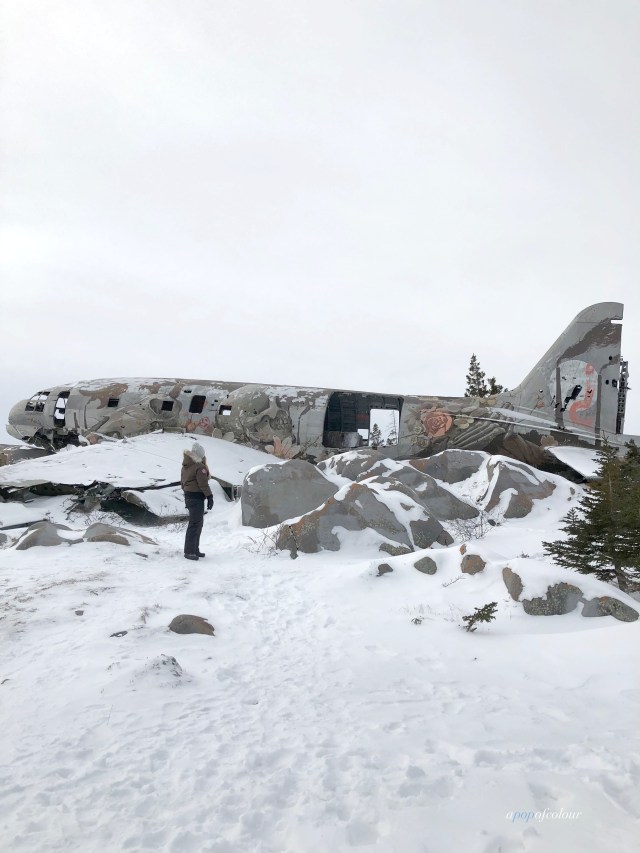 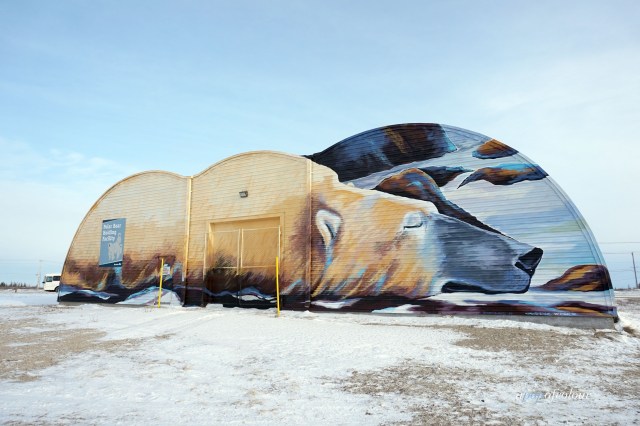 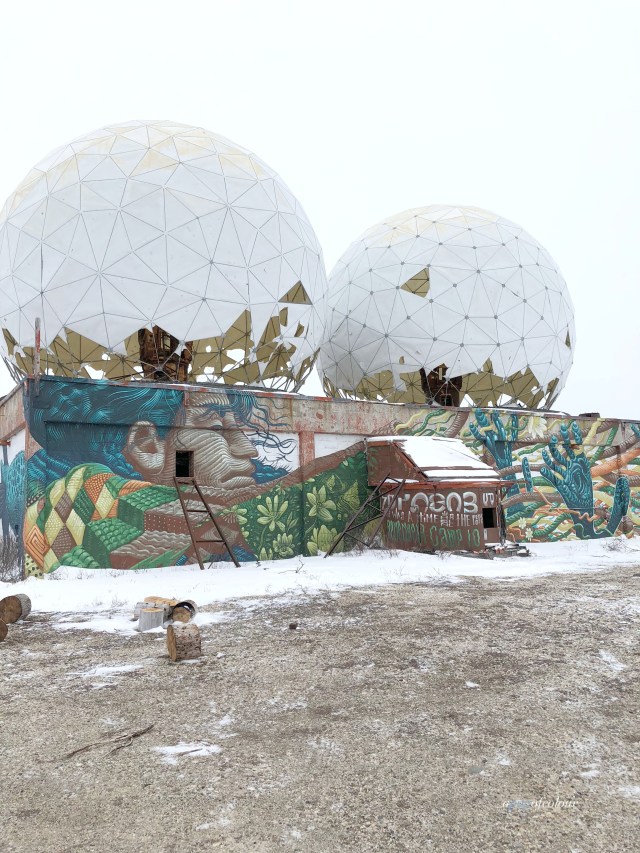 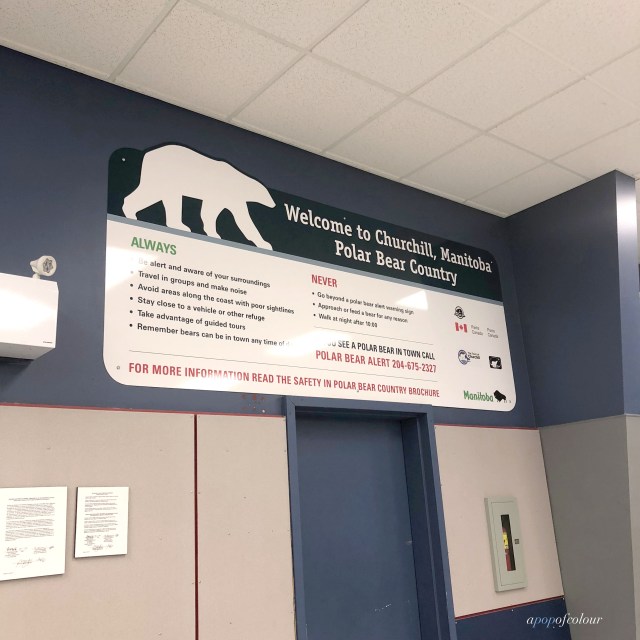 I could seriously go on and on about everything I learned while being up in Churchill this past weekend as it truly was such an amazing trip. The people in the town were so friendly and the area was so beautiful, I can see why it makes so many bucketlists for many people. If you are planning a trip to Churchill and have any questions, please let me know, I would love to answer them!

What’s on your travel bucketlist?

2 Comments on Chilly and magical: Travel guide to Churchill, Manitoba