#amazefesteurope - The Generator Hostel London - A Pop of Colour 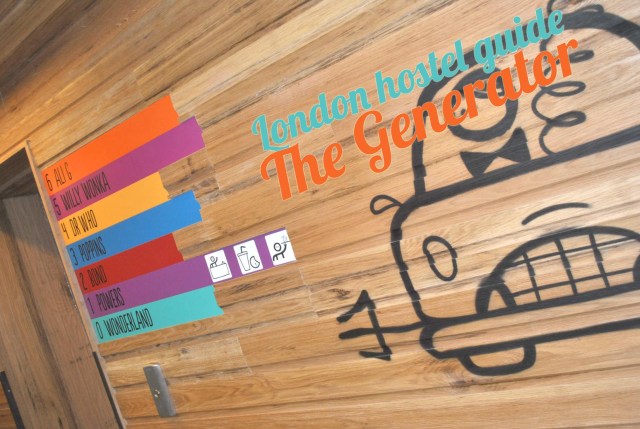 So in addition to being hit with a little culture shock (the accents), I chose to go completely out of my comfort zone and stay in hostels.  Hostels aren’t really a thing in North America (we have them, but most people choose to stay in hotels), and I’m more of a five-star hotel kind of girl, but since it’s Europe, you do as they do, and stay in hostels.  Plus, I feel like that’s just what 20-somethings do… and then there’s the fact that it’s also way more affordable compared to hotels (especially the cities I went to, which are huge tourist destinations, so things tend to be a bit more pricier.  Read, expensive as f***).

Since my only experience with hostels was watching the movie Hostel, I didn’t know what to expect.  What if people snore?  What if someone stole my stuff?  Do you get blankets? I had so many questions. 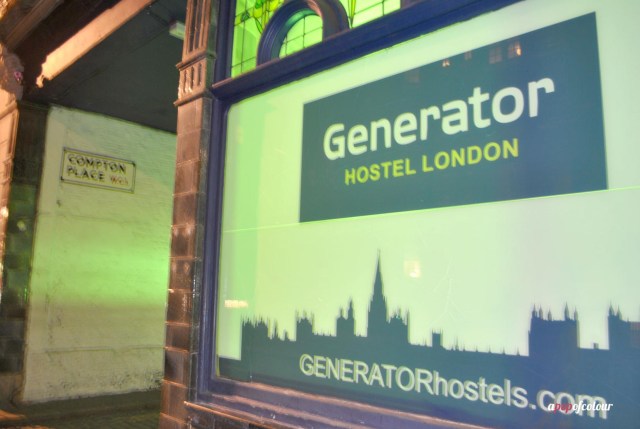 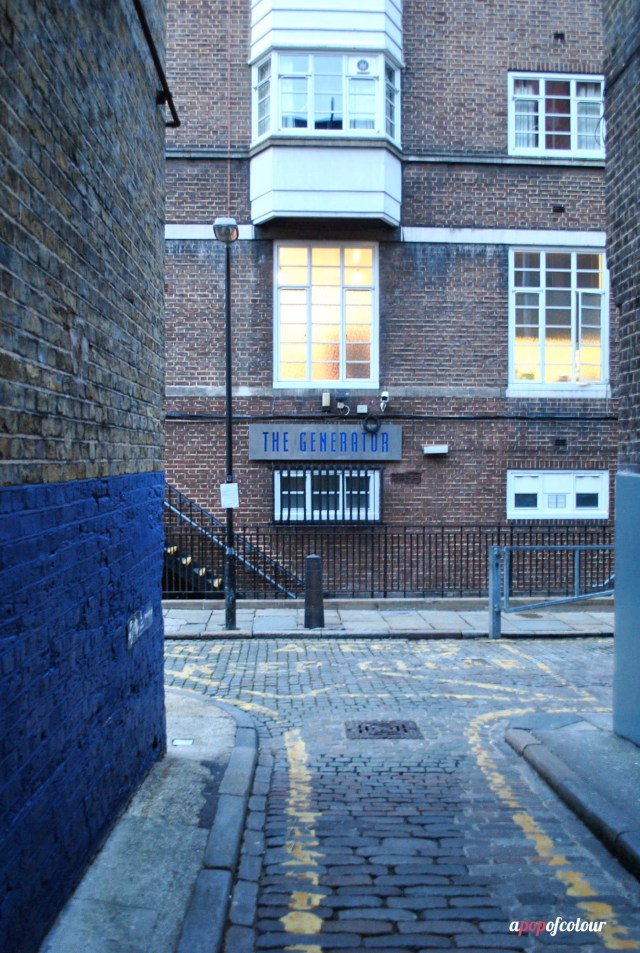 In London, I stayed at The Generator Hostel, which is located at 37 Tavistock Place, a 10-minute walk from King’s Cross/St. Pancreas station.  Generator Hostels is a boutique hostel chain with eight locations throughout Europe (to me, it was like the W Hotel of the hostel world, a bold statement I know, but seriously, this ain’t your typical hostel). I believe that it is one of the more larger hostels in the city and definitely one of the most popular. 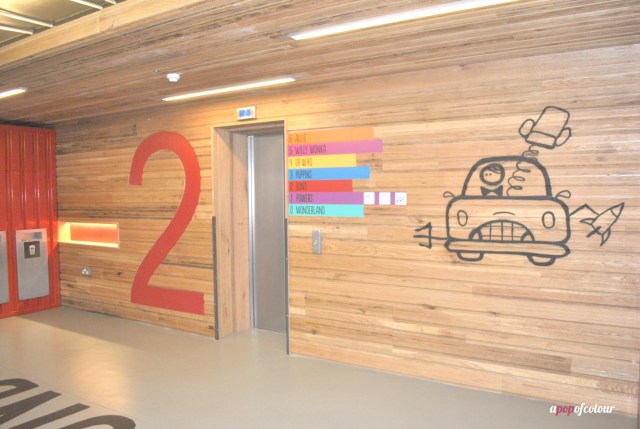 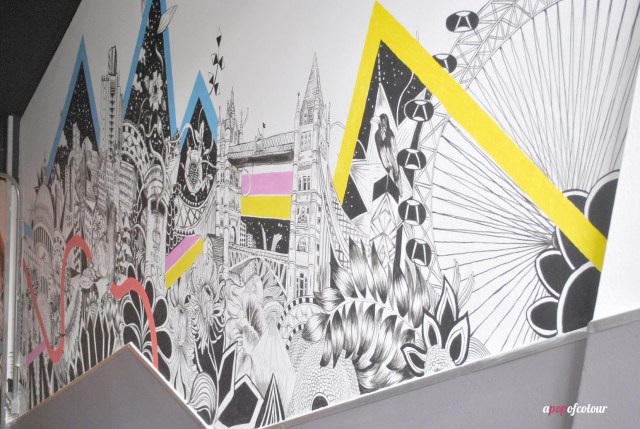 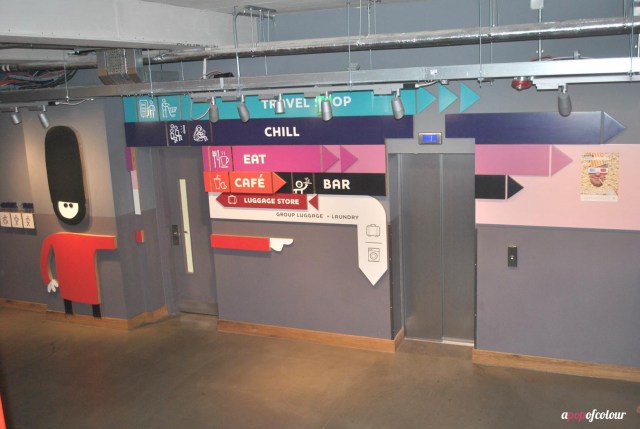 The Generator London is, to sum it up, super trendy.  No doubt, it caters to a younger crowd, and was very much my style — tons of art and lots of colour. The just reopened flagship location features six British-themed floors.   You can choose to sleep in a dorm with other people (they have various choices, 12, 10, 8, or 6 people in a room, from 12 pounds), or a female-only dorm (8, 10, or 12 beds).  If you want more privacy or have multiple people travelling with you, you can choose a private room (single, double, triple or quad).  The private rooms tend to be a bit more money but are worth it if you have a group.  I stayed in a private double on my first night, which had a bunk bed in it, a desk, and a sink and mirror.  It was a small room, but honestly, the only time you are in your room is just to sleep. 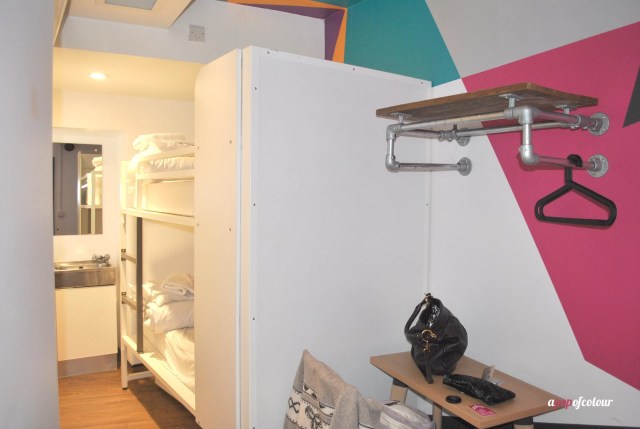 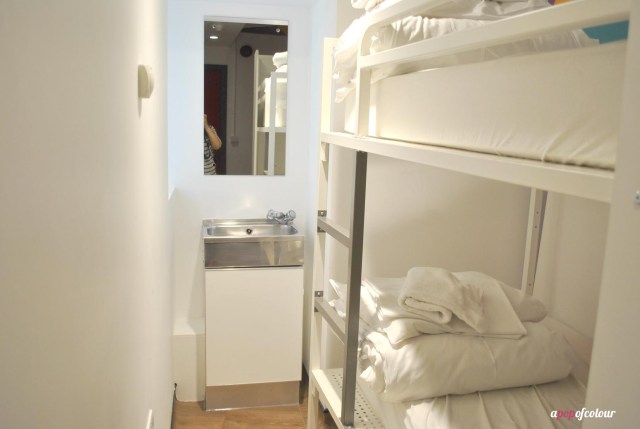 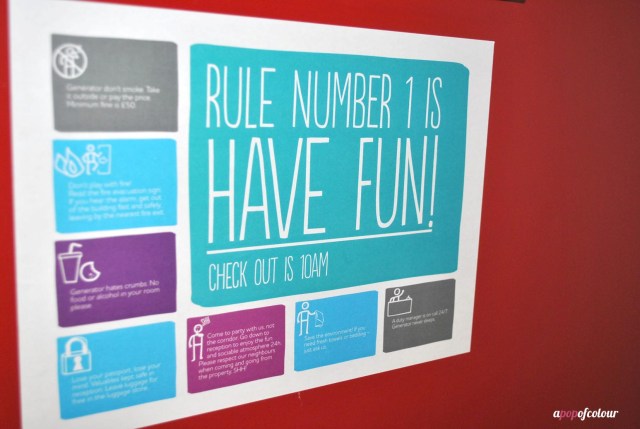 That room goes for 95 pounds, which is a lot considering that it didn’t have a bathroom in it.  The Generator was the only hostel I stayed in on my entire trip that didn’t have a bathroom in the room.  The toilets and shower were located down the hall, about a 30-second walk.  Not a big deal, but considering that the room is close to a hundred pounds, I would expect at least a toilet in the room. There are rooms with private washrooms available, I just didn’t stay in one. I also want to note that although I did find that expensive, the accommodations in London are very pricey.  A hotel room will set you back at least 100 pounds a night.

The next night I spent in an eight person dorm.  Basically it’s just a large room with a bunch of bunk beds. The bunk beds were very modern looking, not your typical run-of-the-mill bunkbed with squeaky coils.  You get linens for both private and dorm (two sheets, a pillow, a pillow case and a blanket), in the privates you also get towels (they are extra for the dorms).  The dorms also have lockers under the beds, which weren’t big enough for my suitcase, so I just stored random things in there and kept my suitcase locked beside my bed.  The beds were comfortable, but the only thing I didn’t like was that there weren’t plugs in every bed.  If I wanted to charge my phone, I had to charge it across the room and share with seven other people, but since there weren’t enough plugs, plus I didn’t want to run and get up when my alarm went off in the morning, I just chose to not charge it (luckily I didn’t use my phone that often because I could only use it on WiFi). 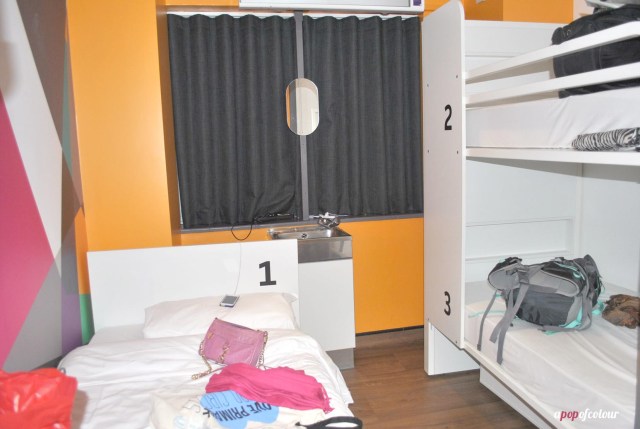 For the final two nights, my two friends and I shared a triple room, which had a twin bed and a bunkbed.  I actually liked that room the most as it was a good size.  It ended up costing us 34.50 pounds each per night.  Again though, the toilets and showers were a bit of a walk away from the room.  With that being said, the shower facilities were awesome (great water pressure) and even the bathrooms were really nice and modern. 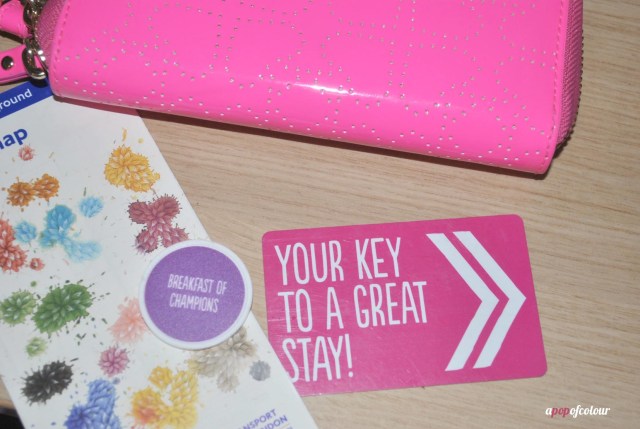 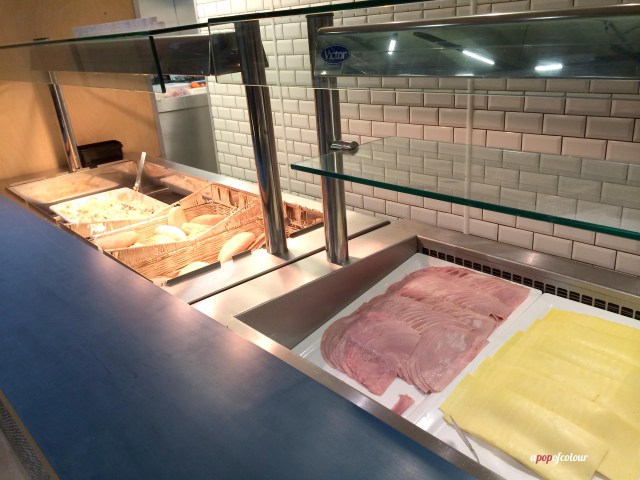 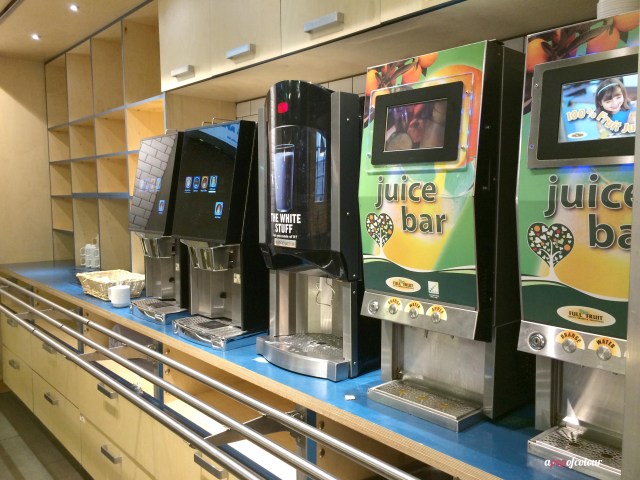 The Generator London also has the option of paying for a buffet breakfast for 4.50 pounds.  I got the breakfast the first morning, but honestly, for what you get, I wouldn’t say it’s worth it.  It was typical hostel food – baguettes, cheese, meat, yogurt, granola, cereal, coffee, juice, oatmeal.  It does the trick, but it’s not the best selection (with that being said, I’m used to American continental breakfast, which gives you more offerings). 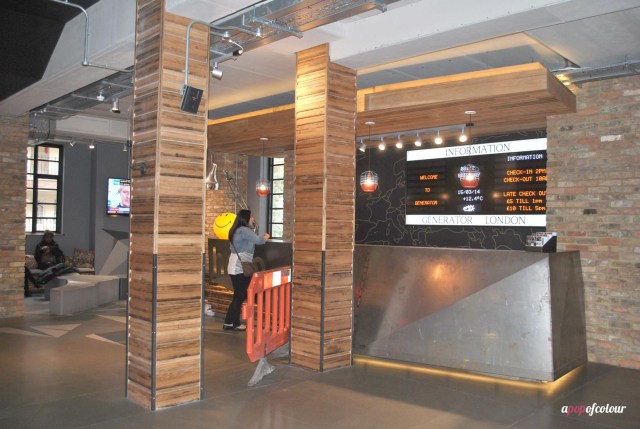 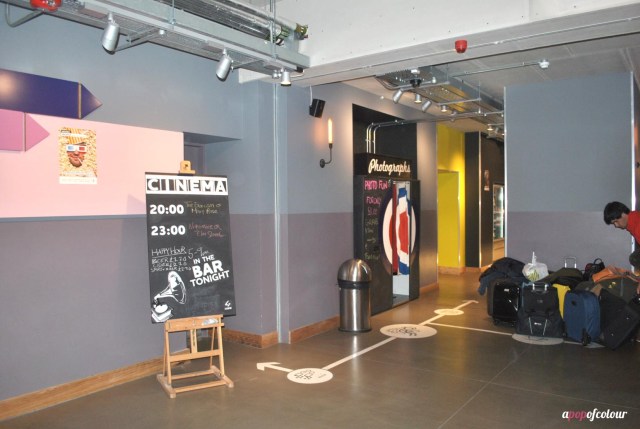 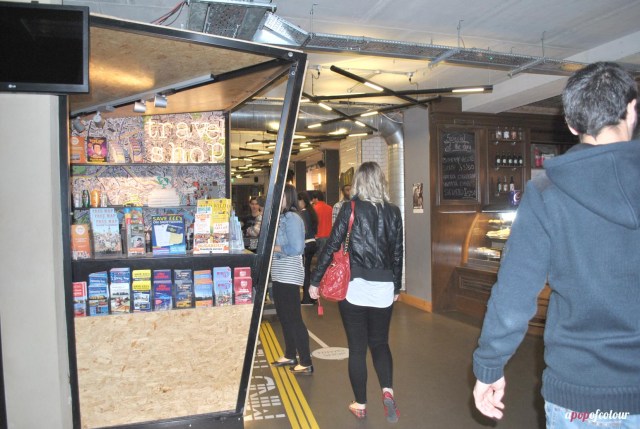 For those who like being social (you’re staying in a hostel, it comes with the territory), there is a bar on-site, which had great drink specials every night from 5 to 9 p.m. (read: cheap beer), as well as a live DJ on some nights and a pool table if that’s your ‘thang.  It was a great place to chat with other travellers, play pool, and just all-around meet people.  There is also a chill-out room where you can play a game of chess or lounge around, a movie room that showed at least two different movies a night, a café, a laundry room, a luggage room (you have to pay to store your bags, buy a half day or full day), and a travel shop where you can buy passes for some of the major tourist attractions. I actually bought my Tower of London ticket and London Eye ticket here. I got a cheaper rate through The Generator on the Tower of London (they also offer student rates, so bring your student card!  I’m not a student anymore but my student card doesn’t have an expiry date, thanks University of Winnipeg!) and they just give you a voucher which you give to the people at the attraction you are at.  The hostel also has free WiFi (a must in my books!) and was very safe at night as you had to show the security guy your card if you arrived after the sun went down. 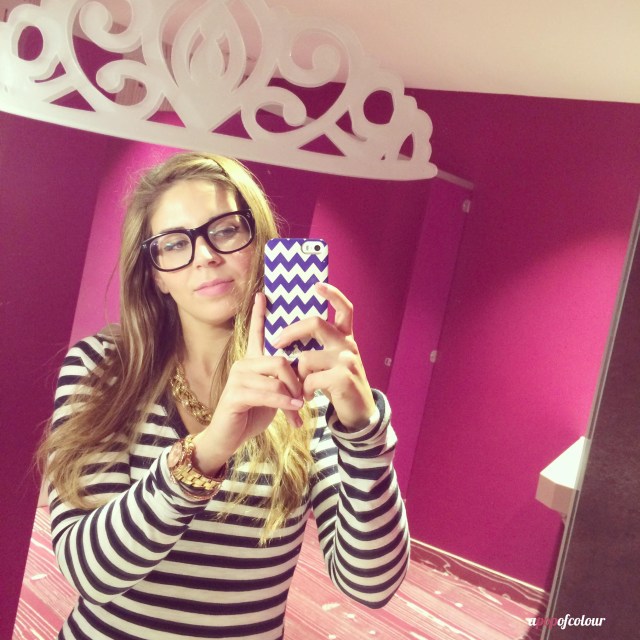 The pink, royal-themed bathrooms in the hostel bar.

Overall, I loved this hostel.  Considering it was the very first hostel I had ever stayed at, it blew my expectations out of the water. The Generator also has locations in Barcelona (including a hotel as well), two in Berlin, Venice, Dublin, Copenhagen, and Hamburg. They are also opening locations in both Rome and Paris soon (both cities I visited, le sigh…). You can book a room online through their official site or through Hostel World. Also, keep an eye on their Facebook page as they sometimes offer promotional deals.

Have you stayed at The Generator London?  What were your thoughts?

Please note, I was offered one night complementary, plus breakfast, in exchange for a review.  All opinions are my own.