Las Vegas 2011: The Mirage Resort and Casino - A Pop of Colour 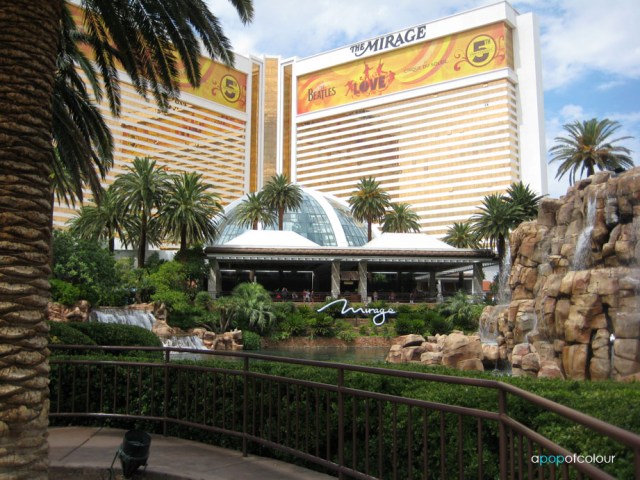 Hi everyone!  So first up on my little Vegas series is the hotel we stayed at, which was the Mirage.  The Mirage Resort and Casino is located near the middle of the Strip right between Caesars Palace and Treasure Island and pretty much across from the Venetian.  In my opinion, I think it is the perfect location if you want to do some shopping because it is literally steps away from the Forum Shops and a few blocks from Fashion Show Mall. 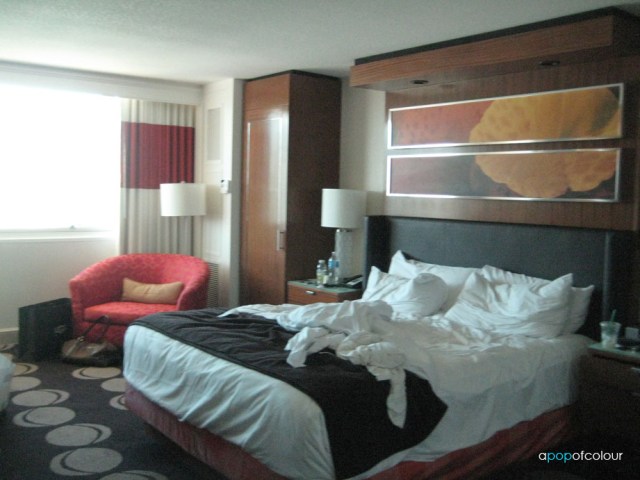 Sorry for the messy sheets, I literally took this photo as we were leaving the room to check out

The hotel opened in 1989 but I believe that they updated the rooms in 2008. We managed to get a Tower Deluxe Room which has a huge bathroom (jacuzzi tub and glass shower as well as two sinks).  I believe that all the rooms feature 42 inch LCD televisions, iHome docking systems, etc.  They also had a mini fridge stocked with stuff you can buy but we never opened it because it was weighted (if you move something you will be charged). 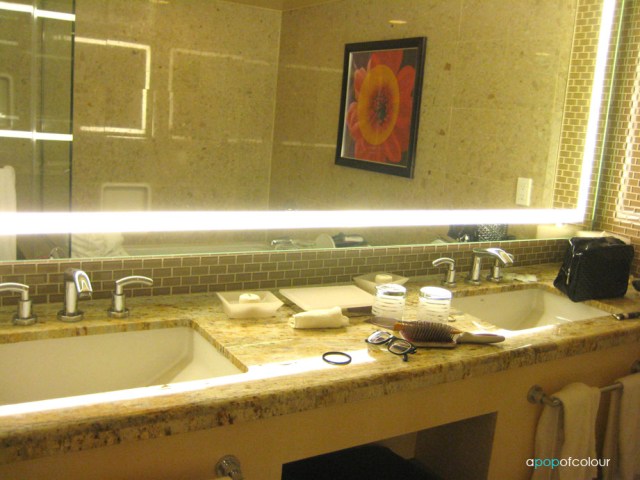 The bed (we had a king size) was one of the most comfiest things I have ever slept on (it even rivalled a W Hotel bed).  According to the Mirage website they are Sealy Posturepedic pillow-top mattresses, which is really nice after a long day and night of shopping, walking, and partying.  Other cool things in the room were the closets on either side of the bed (my friend and I totally made good use of those) and of course, the bath robes. 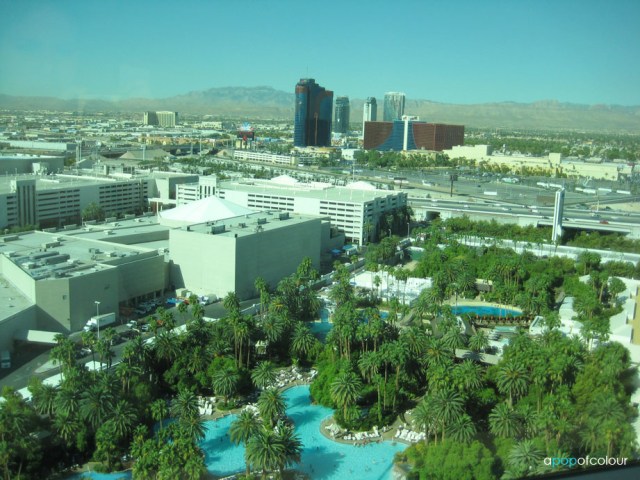 The view from our room

The Tower Deluxe rooms are located on the 24th and 25th floors and are only accessible via a separate elevator.  You have to use your room key to access the floor from the elevator which got kind of annoying because it took us forever to figure out how to swipe the card and press the number.  We saw a lot of people that didn’t know how to work the elevators.

As for the rest of the hotel, I absolutely loved it!  The casino floor is huge (I even found $70 lying around), but it is kind of annoying that you have to walk through the whole casino to get to the hotel or the front doors. 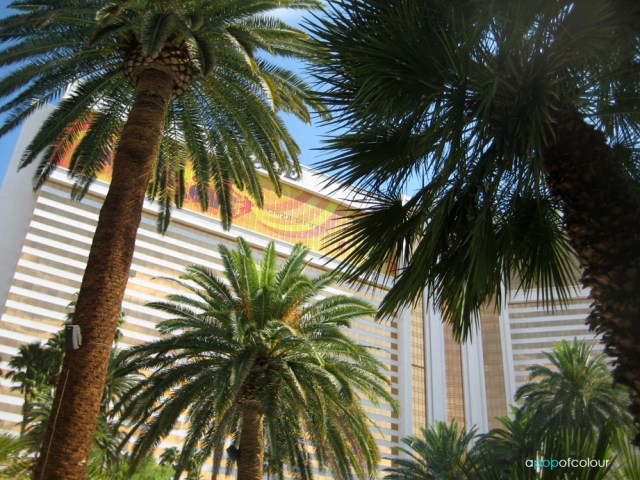 A definite highlight for me was the pool.  The Mirage pool is like being in a tropical paradise.  There is lush foliage, waterfalls, tropical music, birds, etc. It really was like being in a nice oasis away from the bright lights and chaos of Vegas. 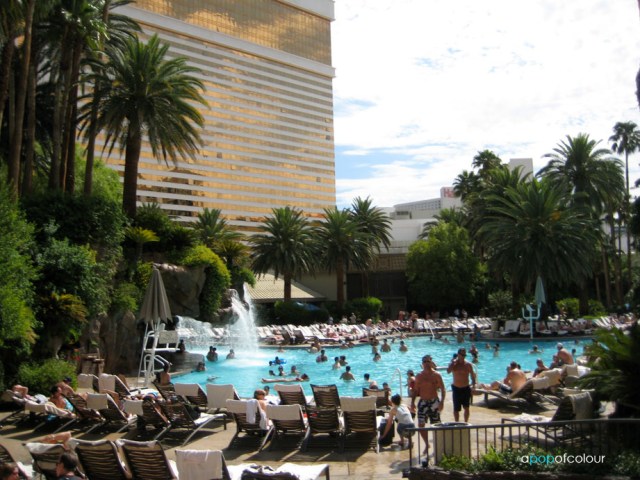 Like anywhere in Vegas, you can drink by the pool and man did those drinks look good.  However, with that being said a large mojito costs $20 (according to the nice Australians we met), and although it would be nice to down a mojito in plus-40 F weather, I would rather spend that $20 somewhere else.  There are signs saying no outside food or beverages but we totally saw people with Blizz frozen yogurts by the pool.

Just a tip for you guys if you plan to stay at the Mirage, if you plan on laying by the pool when you wake up, get up early.  The pool opens at 8 a.m. and you better start claiming your loungers early.  We looked out our window at around 9 a.m. the first morning and we thought that they chairs were white. When we got downstairs it turned out they were all draped in towels because people reserve them then leave.  We did go to the pool around noon on our last day and had no problems finding spots in the sun, so maybe stay away from the pool in the morning hours.  There is also Bare, which is an adult pool/day club where you can tan topless.  We didn’t check that out because you have to pay to get in, although check out the gift shop, there are passes in there (we found that out too late).

As for entertainment, the Mirage is home to The Beatles LOVE Cirque du Soleil, which I saw last time (it was okay, not amazing in my opinion).  There is also Terry Factor, he won America’s Got Talent or something…  If you want nightlife, JET Nightclub is there (soon to be rebranded into another club) as well as The Beatles Revolution Lounge (I’ll get into that stuff in another post).

Lastly, if you are into touristy things, check out the volcano show nightly or Siegfried and Roy’s Secret Garden and Dolphin Habitat.

In total we paid $397.60 for five nights, which is a heck of a deal.  Sign up for the M Life card, they often send promotions through email (that’s why we got it so cheap).  I also did the “$20 trick” when we checked in so we got upgraded into the Tower Deluxe (I asked for a suite but they were sold out). The Mirage does charge a $20 resort fee per night but that includes a variety of things like free wi-fi and local calls which we did use. 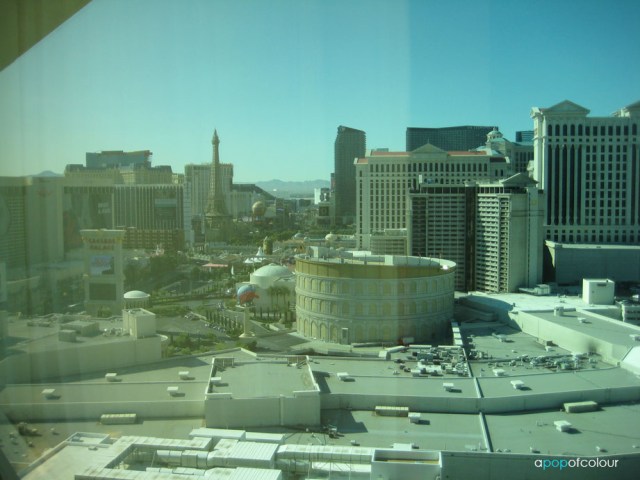 So would I recommend it?  Yes! I would for sure stay there again. In Vegas, the first question you get asked is where you are from and then where you are staying.  The Mirage is a super nice hotel in a great location, can’t go wrong!

Have you stayed at The Mirage?  What were your opinions?